BODY AS A FRIEND

in education to fellings and respect 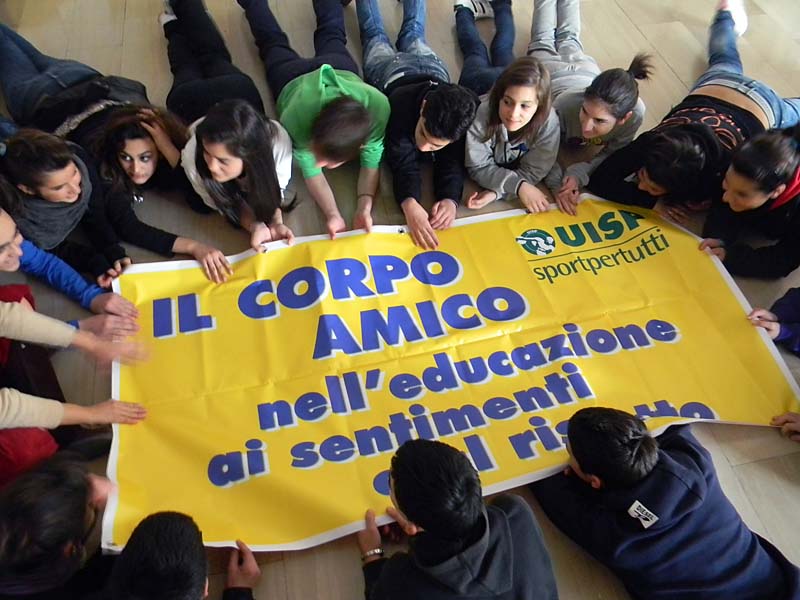 SUMMARY
Incidents of violence against women are still rising, and occur mainly in the home environment. Increasingly important is the phenomenon of gang rapes committed by underage boys against peers, who too often do not report crimes for fear, shame, because subjected to threats and blackmail. For an association of SportforAll which deals with the right to corporality is essential to intervene on the quality of relationships and on gender differences.

From this idea comes "Body as friend", a project that has been proposed to set up awareness actions and acquisition of self-awareness and gender differences between girls and boys of high school, using the methodology of peer education. It is important to work every day in a timely and educational way, especially among the younger generations. Teach them to recognize and prevent violence; express themselves and know its own body and its expressive capabilities, fight stereotypes and prejudices on both the male and the female, learn to respect each other, discover the sphere of feelings, are the cultural axes on which moved the trial.

The educational proposals saw the active participation of students, their teachers, Uisp educators, psychologists, animators and theatrical entertainers. During the school year have been developed experimental laboratories in which about 200 students from 13 and 18 years have moved to the discovery of the man/woman relation, exploring the imaginary, the words, gestures and opportunities, with moments of theatrical animation and motor activity, such as dances, oriental disciplines and games to discover the expressive potential of the body.

This educational activity has enabled the acquisition of skills and sensitivity to interpersonal and communication dimensions, so fighting stereotypes and prejudices on both female and male, encouraging the respect for the other.
A final video recounts the experiences and achievements. All phases of the project were monitored and evaluated in terms of impact and changes in the attitudes of  youth.