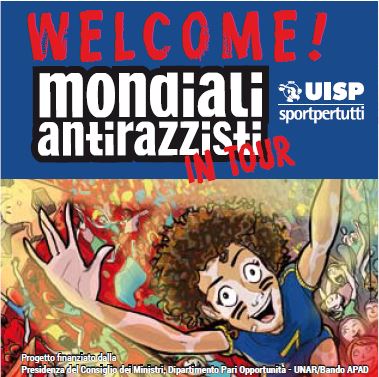 The project is an action against discrimination, to contrast and prevent it through sport activities, educational, artistic and cultural activities.

A networking and awareness job is carried out at local level, with the purpose of encouraging the participation of first and second generation migrants, refugees and asylum seekers, and building a constructive dialogue  with Local Institutions, Refugees’ Centres, migrants based and volunteer based associations in order to start or reinforce local synergies on the issue of integration and fight against discrimination.

In addition, a permanent awareness campaign through Uisp networks is dedicated to sensitise public opinion and territories involved in the project.

To encourage social inclusion of first and second generation of migrant youth, refugees and asylum seekers, and promote intercultural dialogue and discussion, meeting, exchange among foreigners and Italian youth. Common spaces, moments and sport sociality occasions are the instruments allowing this aim.

3 - Increase in the number and opportunities of  access to sports and cultural initiatives addressed to young first and second generation migrants, refugees and asylum seekers and aimed at favouring integration processes in the territory

4 - Increased forms of collaboration between and with local stakeholders (Local Institutions, Refugees Centres, migrants' and / or volunteers' associations) for the promotion of local initiatives and policies to fight against all forms of discrimination and promotion of equal opportunities for access to citizenship rights based on the sport methodology, proposed and consolidated by Uisp.