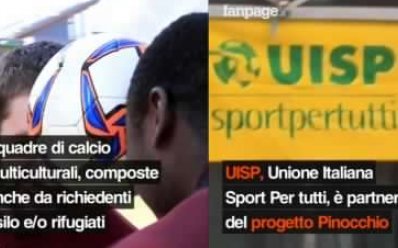 Zoombombing is the last frontier of racism. But it is possible to fight discrimination, even through sport. The article of Fanpage

A video on sport as a tool to combat discrimination was also shared in recent days. WATCH THE VIDEO

Wednesday, February 24th, as part of the Pinocchio project, was carried out the online event, titled "Discrimination is a virus, let's take care of it with the culture, to which many guests and all the project partners have taken part. Carlo Balestri, responsible for Uisp international policies, spoke for Uisp. WATCH THE LIVE VIDEO

"It's called "zoombombing "and it's the last frontier of online racism" – is written in the Fanpage article - uninvited people break into video conferences or meetings on internet platforms, alone or in groups, and begin to insult the participants, preventing them from speaking, spreading discriminatory messages and sharing sexist, transomophobic images and videos praising fascism and Nazism. The latest episode took place on January the 10th 2021, when an anti-Semitic group interrupted the presentation of a book by launching racist insults. Shortly before it was the turn of a conference against violence against women. But targeted by haters are also school lessons or business meetings, where messages of hate are spread against the "different" people: from immigrants to disabled, including all differences of religion, nationality, disability and gender identity.

In real life the situation does not improve: if it is true that 68 percent of Italians are still favorably disposed towards refugees and agree with the immigration policies inspired by the welcoming right, it is also true that, according to the Discriminatory Acts (Oscad), a racist attack is recorded in our country every nine hours. In the last eighteen years, 7,426 episodes of racism have been recorded, including 5,340 cases of verbal violence, 901 physical attacks against persons, 177 damage to property and 1,008 cases of discrimination.

The phenomenon is constantly increasing: according to the Oscad, in 2019 were reported 726 cases of violence based on race, ethnicity, nationality or religion, i.e. many more than the 494 cases of three years earlier. In addition, it has been recorded an increase in physical attacks (from 28 in 2016 to 93), acts of vandalism (from 5 to 10) and public nuisance (from 49 to 91). However, they are incomplete data, because a large part of the episodes are not reported and only the most striking cases end up in the newspapers.

Among these, it stands out the episode of a Brazilian woman insulted by a shopkeeper in Turin because she did not express herself well. The restrictions provided by municipality of L'Aquila for the distribution of funds to afford the food emergency during the pandemic should also be mentioned.  We could go on remembering the insults heard in a Sardinian hospital, where a doctor uttered words like "finally we are sending them all home" and "bananas and sand are enough for them"; reports from Chinese citizens victims of offenses due to the coronavirus; the murder of the young cook Willy Monteiro Duarte, on September the 6th in Colleferro, Lazio: the sentence pronounced by a family member of the killers ("After all, what did they do? Anything. They only killed a non-EU citizen”) unleashed a wave of indignation throughout Italy. In the same way the discussion between the players Zatlan Ibrahimovic and Romelu Lukaku during the Coppa Italia Inter-Milan derby inflamed the social networks.

But an antidote to racism exists: culture, knowledge of the other that overcomes the “fear of the different”. Sport meets this need. Training and playing together helps to overcome barriers, even linguistic ones, and promotes mutual exchange and knowledge. Uisp, the Italian Sports For All Union, was born in 1948 with the aim of making sport accessible to all regardless of economic and social condition, and has always been committed against racism. Partner of the project "Pinocchio: Culture, sport, civic participation and social networks against discrimination for greater social inclusion", funded by the Italian Agency for Development Cooperation, and as part of it, Uisp has launched a training course in schools, addressed to Third Sector Associations and Amateur Sports Associations of four Italian cities (Rome, Caserta, Genoa and Bologna), with the aims of increasing students' knowledge, preventing racist attitudes and behaviors and working on prejudices and stereotypes.

"Through sport - says Uisp president Vincenzo Manco - refugees can be given the space and time to move, get in touch with other people and establish relationships, regain their lost dignity, as well as the human right to play". The Uisp guarantees everyone to do sports, also by activating ad hoc initiatives such as the women's swimming pool in Turin, where only women enter once a week, to allow Muslims to practice an activity that would otherwise be precluded to them. Or it encourages the sports of "others", such as cricket and Ecuadorian volleyball.

And then Uisp implement projects such as "Il Calciastorie", in collaboration with Lega Calcio Serie A: thanks to the direct participation of the football clubs, a training course against discrimination in football has been provided in the high schools of fifteen Italian cities. Similarly, "Sportantenne" project, in partnership with the National Office against Racial Discrimination, made it possible to collect data on episodes of racism throughout the country. And then Uisp organize every year a series of sports initiatives against racism called the "Antiracist Almanac", which includes the Antiracist World Cup, an intercultural laboratory that brings together since 25 years thousands of young people in a four-day festival of sport, culture and music and that can be considered the most largest and longest-running event of popular sport against racism.

In the difficult months of the pandemic, in which sports activities had to stop due to the health emergency, Uisp collaborated in the launch of the National Observatory against Discrimination in Sport, thanks to a memorandun of understanding signed by Usip, UNAR - National Anti-Discrimination Office Razziali and Lunaria association.