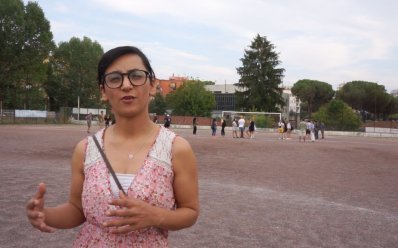 Uisp video interview with the former captain of the Afghan women's national football team, who emphasizes the importance of sport as a tool for inclusion

The meeting of the European IRTS-Integration of Refugees Through Sport project was held in Rome on Tuesday 7th September. Participants met on the field of Uisp Roma football team Liberi Nantes and got to know its reality. On this occasion, UISP interviewed Khalida Popal, founder and director of the Girl Power Organization and program and events director of the Afghanistan women's national football team.

Refugee and resident in Denmark, Khalida uses sport as a social activity and through some specific programs she tries to help women, refugees and non-refugees, who need support and help to integrate into society. Football is a tool to include women and girls and also to make the voices of the women of Afghanistan heard, a country that despite the international aid received, is still struggling. "As a woman and a refugee, I use sport and activity to empower and support women and girls, who need inclusion and integration into society. Football has always been a tool to push for emancipation and inclusion, as well as a way to make my voice heard as an Afghan woman”, says Khalida. Football is a means of realizing her activism, used to claim her right to take sides and to encourage women and girls to join the movement through sport. The Afghan women's national football team has also pursued this commitment: since its foundation in 2007, the national team has been an instrument for affirming adversity to the Taliban and saying no to those who, during the dark years of the regime, stole the right of women to education and active participation. "They silenced us, and women disappeared from society, while facing challenges in terms of sexual abuse, discrimination, lack of participation. Once - remembers Khalida - while I was playing football on a school pitch, a group of men took the ball away from us saying that women and girls cannot play and that they are made to stay at home cleaning dishes or serving men. I could cry but I preferred to use my voice (because I don't have a gun, I don't know how to use it and I don't want to use it). Well, my voice has been my strength to push boys, girls and women to join me in sport. "

Fresh from many challenges and death threats, Khalida had to flee Afghanistan. Of that moment she remembers: "When I was in the refugee center, I felt I could not do anything. I had no network, I had no friends, I had no one and I was suffering from depression. Sport helped me to get up and I used my voice to encourage women and girls to defend themselves. Sport is a means that includes and creates a social moment, a real community". The activist says she is very worried about the ongoing humanitarian crisis in the country after the fall of Kabul, which affects the young generation that had no direct experience of the dark Taliban regime. "Women will lose their voices, they will live another dark period. People feel abandoned, they are left alone, they have no protection. Sport can create a network, unite and help those in difficulty to get out of the country and be safe", says Khalida. Finally, her message to women: "You still have power, use it! Don't feel useless! If you are a woman in pain, speak up and get support. Unite people to stand up for what is right and the rights of all. Use your voice! It's important. " (C.F. and S.P).