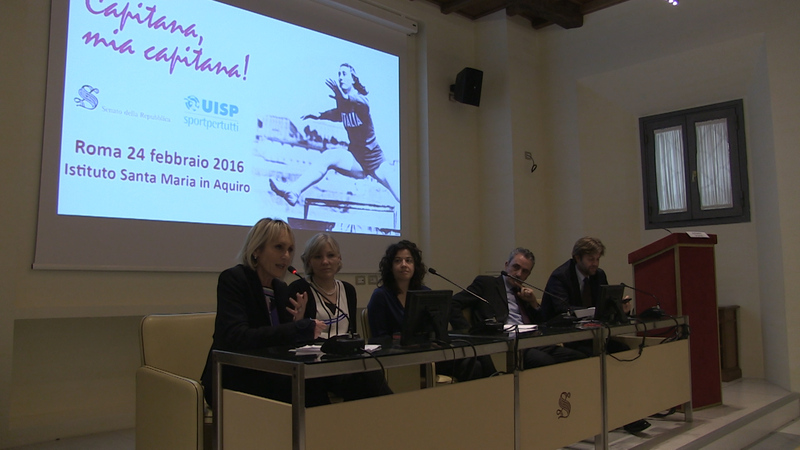 Event promoted by the Vice President of Senate Valeria Fedeli with Uisp for the equal opportunity of gender.

On 24th February at the Senate building has been presented the congress “O capitana, mia capitana!” promoted by the Vice President of the Senate Valeria Fedeli with UISP, with the goal of making a step forward on the debate for promoting equal opportunity between women and men in sport.

In the opening message of the MP Fedeli she underlined the fact that: “the non recognising of the professionalism for the women sport determines deep fallout in term of absence of the health protection, insurance, motherhood, social security, equal salary. For this reason we presented a legislative proposal for modifying the present law and promote the equal opportunity for gender in the relationship between clubs and professional sportswomen. An important step for updating the sport law coherently with the Constitution, and in line with the more advanced European and International right, on the matter of equal opportunity between women and men”

Manuela Claysset, Uisp National of Council and responsible for the equal opportunity policy has focused her attention on the importance of the Chart for the Rights of Women in sport, promoted by Uisp on 1985 and updated in 2011 thanks a European project: “A document which should be adopted mandatorily by the sport, political and institutional world, because it goes in the direction of the equal opportunity and rights and promotes a larger participation of women in sport. Another important aspect is the participation in European activities and project. It is so important to collect numbers and data, analysing the situation and denouncing it where the equal rights are not reached for all women. At the moment we are part of a project promoted by the Alice Milliat Foundation, that will start in March.”

Vincenzo Manco, UISP National President underline that Uisp is historically engaged “to build paths of emancipation for the women sport, both for claiming for the rights and to ask for more women in leadership position. Our major topic is how to transform the sport culture: we want a sport world more open to women and respectful of their needs, their time and spaces. Starting from how to rebuild “women friendly” sport centres.

Josefa Idem, gold medallist in many Olympic Games in kayak and actually member of the Italian Senate, declared: being a woman in a sport like mine has meant to overall prejudices. I made a sport where strength is important and people thought wasn’t a good model of femininity. Today is surely easier, but there are still many conquests to do, as for example the extension of the professionalism also for women. Till nowadays there are some sportswomen obliged to undersign clauses anti-motherhood. Our Federations should accept women and men have the same rights, it is not any more possible to do the things as “courtesy” by the Federations.

Ivana Vaccari, sport journalist in RAI TV: when I started my career of sport journalist, I was the only woman in the editorial staff. I also observed there were quite no news about women sport, no covering of the tournaments and games.

It should be so important to tell about stories. Very often it happens that when we (women) arrive to occupy position historically occupied by men, we lost our capacity of telling things in a different way, we adopt languages and modalities of the men. On the opposite we should regain the capacity of telling stories, especially the good stories about women and sport.

Talking about high level position, if the election is made by the majority of men, or if the candidature of a woman is proposed by a man, very often it happens the man chooses the “less dangerous” woman: the one who will not give any problem in following his ideas. That’s way it is so important also to look at the board and try to have more women in.

Anyway, honestly, talking about our responsibilities: how many time women vote for other women? It seems women shouldn’t be able of making group.

Laura Coccia, ex Paralympic medallist and now member of the Parliament: in my life I had to overall a double discrimination: as woman and as disabled. Practising sport I also had to learn how to face with my body, accepting the fact I should expose myself, overwhelming lots of challenges. I find absurd that in 2016 the sport women should fight for their rights, rights acquired by the other women years ago: motherhood, social security, equal salary.

Filippo Fossati, former UISP President and now member of Parliament: it is so important to understand the gender diversity are a richness for any society, and if they are should equally represented in all the directive board any organisation will benefit of this diversity of competences, way of being and think, skills.

Sport in Italy (especially at high level) should do this step forward, the sport for all organisations (as UISP) started this process decades ago, and it is not anymore possible they are the only one.

Katia Serra, former footballer in Bologna Fc and AS Roma: I had to overall many difficulties too, and I have seen many colleagues to leave, because they didn’t tolerate how the situation. It is true that all the struggles should start form us, but we need the support of the men to win. I’m not a fan of the pink quote, I prefer to speak about gender quote, where it is possible to find a correct equilibrium and respect of competences.

In football we have to do a lot of work, it is still considered a “male sport” and there’s a lot of prejudices linked to this sport. Even when we think about the sport infrastructure it is important to think again the sport centre in a “women friendly” way.

Raffaella Chiodo, UISP Intercultural department and chairwomen FARE network: in the last period we observed the raising up of many scandals in football (Fifa, Uefa, Italy), but this could be a way to oblige this Institutions to rethink their values system, and to promote more social responsibilities campaign also on the topic of women’s right. Uefa and Fifa just started: Uefa with many action in close cooperation with FARE network; Fifa presented recently a draft about women right and organising in Zurich on March a conference about “Women’s football and leadership”.

Also the non profit organisations should transform themselves in term of board. Consider that FARE network has finally after 15 years a board with 6 women on 9 and the chair and vice chair women, after many years where at the beginning there were only a woman. Some chinks are opening, we have to go in.

Carolina Morace, former captain of the Female Italian National team of football: I don’t understand why it is so difficult for a women to become a coach. A man who want to train a female team hasn’t quite nothing to demonstrate, for a woman it is different: you have to prove your long experiences as footballers, your skills and everything.

And I don’t understand why there are so few female coaches training any kind of female teams. It seems normal for everybody to see a man in the bench. And why a woman couldn’t train also a male team? Where are the differences?

Video realised by UISP here you can find images and number of women sport, from the ’50 to nowadays.

video interview with Carolina Morace, ex captain of the Female Italian National team of football, actually in Australia as coach.

Complete recording of the event.