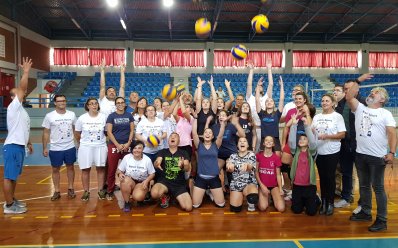 The second meeting of the project Match-Sport (Make Amateur Sport Tolerant and Eliminating Racism and Discrimination) has been hosted by the Municipality of Neo Propontida, Greece. This project is coordinated by EFUS (European Forum for the Urban Security) and Uisp is partner, it is supported by the programme Erasmus+ Sport. In these 2 days of work the group of partners shared important reflections about the discriminatory violence in the grassroots sport.

For UISP were present Carlo Balestri, head of international policies Uisp, and Daniela Conti, they are part of the group of European experts who reported on the state of the art of the topic in question: "The research work carried out in these months - Daniela Conti said - highlighted how in Italy there is no monitoring system regarding episodes of discriminatory violence in grassroots sport. Apart from the news coming out in the newspapers (especially local ones) and the reports of our sport workers, it is not possible to measure how large this phenomenon is and obviously it is not possible to carry out an analysis on the growth / decrease of the episodes ".

From the discussion it came out as in the other countries that have set up monitoring systems (Germany, Portugal, France), the phenomenon is in alarming growth even among adolescents. "In all European countries - declares Carlo Balestri – the researchers expressed concern with respect to the phenomenon of violence between parents while they attend the games and competitions of their children: verbal insults to their opponents (also using racist languages) and to the referee, disputes heavy also against his coach. The grassroots sport in this way risk to be no longer a place of socialization and inclusion"

This first analysis revealed the need for the tools that will be developed with the project, intended for both technicians and managers of sports associations, and for officials of municipalities involved in the project. In Italy the Municipality of Maranello and that of Loano one have been committed for years to promoting ethical maps and safe and inclusive city projects. Uisp will actively contribute to the drafting of all materials and in 2020 will participate in a series of activities and events organized by the two municipalities involved for the promotion of training kits and other processed materials.

The meeting in Macedonia was also an important opportunity to visit some basic sports facilities and talk to young people who play sports, listening to them if and what problems they face as athletes: insults from other teams, violence in the stands, exclusion from the sports world for reasons related to sexual orientation, gender or skin colour.

The next meeting is scheduled for February in Liège: the materials produced and the national events will be presented, and the meeting will be held by the Belgian Fan coaching, an association that deals with the prevention of violence and racism in the ultras world through social projects. With this association, Uisp, through Progetto Ultrà, collaborated in the organization of the Fan Embassies for the Europeans of 2000 and one of their delegations participated for several years in the Mondiali Antirazzisti.