Match Sport: how to takle the violence in sport 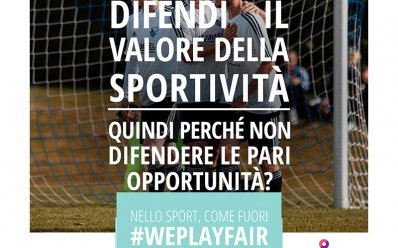 The European project in which UISP is partner is about to end. The distortions of the sporting phenomenon emerged from the training meetings orgnised within the project.

The Match-Sport project, co-financed by the Erasmus + program of the European Union, is starting its final stages. In fact, the project will officially close on 30th June 2021 following the extension granted by the European Commission due to the persistence of the pandemic state.

The aim of the project was to analyze the phenomenon of violence, in particular that of a discriminatory nature in grassroots sport, and offer help to local authorities and sport clubs to fight it. As part of the project, an online communication campaign aimed at social media was devised, disseminated on the occasion of the European Week of Sport 2020, from 23 to 30 September: the #weplayfair campaign created a series of posters aimed to raising awareness on discrimination and violence in sport and to promote the actions carried out within the project. The campaign is mainly aimed at players on the field, sports professionals, amateur clubs, antidiscrimination associations, but also targets a wider audience and local institutions.

In recent months, training events have been held for sports educators from the 5 countries involved in the project on various issues, all focused on how to combat the phenomenon of violence and discrimination in grassroots sport. The training appointments coordinated by the leader of the project EFUS-European Forum for Urban Security  took place online and involved a total of about one hundred people.

Uisp conducted two seminars on "How to reduce violence and discrimination in grassroots sport", focusing in particular on how to change the rules and create innovative solutions that allow greater inclusion. To combat discrimination, it is increasingly necessary to propose mixed activities, which do not have barriers of access due to motor and mental difficulties, difference in sex or gender orientation, ethnic origin or colour of the skin. Another important topic was how to fight violence in stadiums, but also in amateur pitches and the phenomenon of "parents hooligan" who often prevent their children from enjoying sport in a peaceful way. For combating such form of discrimination has been used many Uisp good practices such as: Mondiali Antirazzisti, Baskin, Oltre le regole, European Charts of Womens’ right in Sport, Membership Alias.

Carlo Balestri and Daniela Conti conducted a seminar on 23 and 24 February for 25 sports educators and managers of ASD from Loano and Maranello, whose municipalities are partners in the project. The training intervention saw the active participation of all participants and focused on the methodology of the Campo dei miracoli (Field of Miracles), already experienced in the Pinocchio project. The discussion was heated above all on the issue of discrimination against women in the practice some kind of sports and the stereotypes that revolve around the world of athletes. Another issue that monopolized the discussion was that of violence on and off the pitch, and the tendency of some parents to foment violence in the stands, also overriding the role of the coaches.

Training for 25 sports educators, managers of local associations and managers of sports facilities in Liège and Valence took place on 9 and 16 March: the project partners are, in fact, the Municipality of Valence and the Planet Rugby Association for France. and the Municipality of Liège and the Association of Ultras of the Standard Liège for Belgium. This meeting was conducted in French by Daniela Conti and Layla Mousa and, in addition to the presentation of Uisp good practices and the vision that the association has in putting the person with their needs at the centre, a joint discussion session was proposed. Also in this case the main theme was that of verbal and physical violence that develops in grassroots sport and which often exceeds even in discriminatory behaviours towards black people or people with different ethnic backgrounds. In particular, we discussed the cultural mediation methodology carried out in the past by Progetto Ultrà which then has been used in the Mondiali Antirazzisti, and the good practices implemented by the Belgian association that works in the stadium and by the French association that works with rugby in the poorer and more complex neighbourhoods. Also in this case one issue dominated above all: the interference of parents who often become violent during matches.

In all these training meeting has raise up a strong problem: the excessive attention to champions, the exaltation of professionalism, the money that revolves around some of the greatest champions that give life to a distorted vision of sport for young people, which is and it should remain above all fun, education and socialization.